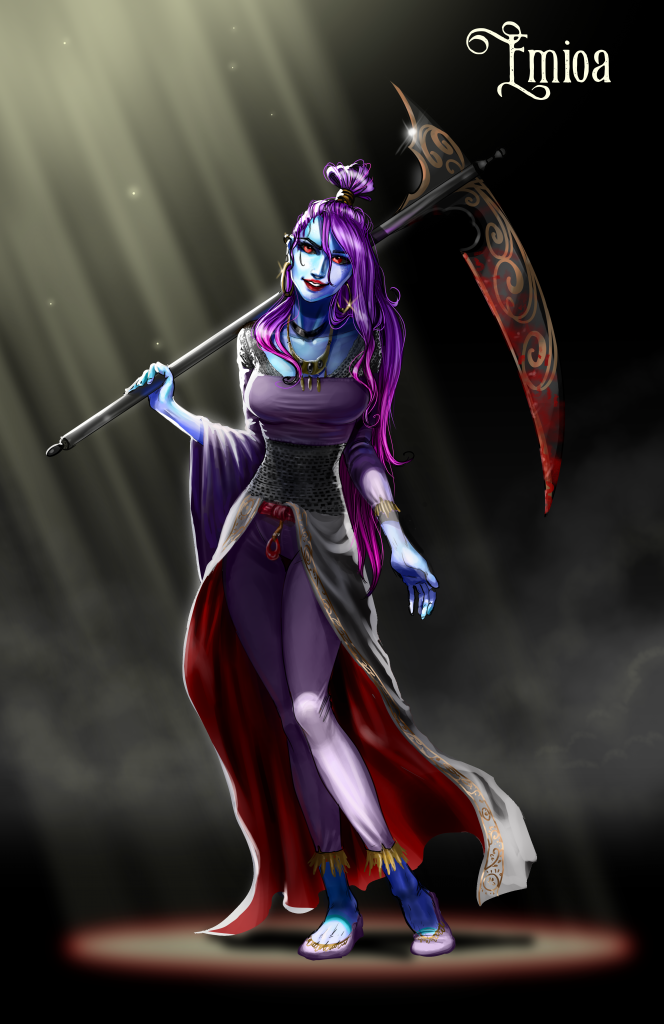 Below, you will find the information and history of the Indago race, as known to the scholars in the 14th Age, where A Tempest Season currently takes place.

The Indago are a slender race of humanoid beings that have bright blue skin. Their skin color is theorized to be blue due to some form of generation or extended exposure from the Magical Stream during ancient times. Both male and female Indagos have long hair, sometimes ranging past their waist. Indagos have a frail body with very little physical strength. Their prowess and talents lie in their intelligence and ability to make direct connections to the Gaia Tributary. This makes them extremely proficient magic users.

Ancient records reveal an era in which some beings discovered they could consciously tap their energy into the Magic Stream and manipulate its power for their own end. These people became known as the Indagoians and are recognized by their vibrant blue skin from extended exposure to the Gaia Tributary. These people quickly became known as the self-proclaimed “Chosen Ones” and assigned themselves the task of guarding the natural order of the planet for thousands of years. Archaic texts show that the Indagoians believed the stream bequeathed the natural process of life unto the earth. The values of the Indagoian people have been lost over time but the tradition is still carried on by the Order of the Shield.

Due to this sense of superiority, the Indagos have unfortunately been a catalyst for almost every major catastrophic event in Eihydia. In the past Indagos ruled over large Kingdoms that spanned North and South Kel-sith, but as time waned on, wars and catastrophic events took their toll and they’re a remnant of their former glorious self. All that remains of their past is the small kingdom of Kai’vivorian Empire in the northern section of North Kel-sith.

Indagos were notorious for using Magic without cause and restraint. Their crave and lust for power drove them to carelessly seek out any way to improve their knowledge in the Arcane. During the early Ages, it was not uncommon for Indago Arcane users to reduce an area to a desolate landscape. Overtime, and as their imperial influence vanished, they learned to restrain themselves and control their cravings for power and the secrets of the Arcane.

Indagos were directly involved in the Age of Eclipse and the Last Rites of the Righteous – where the Order of the Shield was destroyed. Once again, during the Age of Recovery(13th Age), another rogue Indago, Raine Oka’Windia de’Kai’Vivorian, set off the catalyst that would be Sesi-kai and the Sesian Empire. Sesi-kai had the unique capability to bend the Magical Stream to his will and had seemingly limitless power. He eventually enslaved much of the world. It was only the appearance of The Tempest, an ancient weapon, that helped in his downfall.

Even so, Indagos still form a prominent portion of Eihydia society, especially in the Arcane Order. In the 14th Age, they are regarded positively by most races, however, their reputation proceeds them.

Indagos are arrogant and believe they’re superior than all other races, even Humans. Due to their belief of being the chosen ones from the original creator of the world, they often look down upon other races. At times, this can put a bad taste in other’s mouths. Regardless, they do mingle and make friends outside of their race, but this is not as common as other races. The key to Indagos is earning their respect, which is difficult to do. However, they will generally respect and look up to authority figures.

Indagos are intelligent and capable of processing large amounts of data quickly. Their mental prowess has always been in demand. For this reason, Indagos are not adverse to selling their services.

Indagos have slight racial tensions with everyone due to their superiority complex. However, most Cryinales despise the majority of Indagos.

Indagos and Gremlins are extremely hostile towards each other. During the early formation of the Gremlins, they were feasting upon Indago Mages in Tralisia. See Gremlin History for more background.

Ethari Elves: as there are vague indications they were once enslaved by the Ethari.

Indagos predominantly reside in North Kel-sith in the Kai’vivorian Empire. They also reside in large populations in Eridan, the home to the Magic Guild and Arcane Order. Due to their curious personality and drive for power, they can be found in all cities around the world.

Indago are best suited to be Mages, Wizards, and Arcanists. They are sub-par at all other classes due to their low health and strength. Due to Indagos strong relationship to the Arcane, it’s uncommon for an Indago to be a Cleric.

This race starts with the following attributes:

These may be leveled up in game and will scale accordingly to their starting numbers. To learn more about attributes, visit the Attribute page.