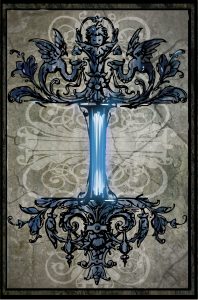 Religion: There is no organized religion at this time.

At this time, and for the reminding Ages, the geography of the world is mostly consistent with the current Age (14th Age).

The first Humans emerge from the dark wilderness of Eihydia. They begin to build a new civilization on various continents – North and South Kel-sith and Denual(Evonia). They form new societies and construct strong cultural ties with one another in the bonds of mortality. Many smaller settlements and over land trade routes begin to take shape. One city, Ema, begins to slowly becomes established as a central trading hub on South Kel-sith. This city is governed by a Triumvirate of Ancients which retained their grace with the Entity: Asterian, Lurian, and Renilian.

Towards the end of the Age, the Humans begin to form many smaller kingdoms and nation-states, and expend a great deal of effort on refining their laws and societies. Some even start exploring the Unknown Lands. There is little sea-fearing exploration during this time – Denual has no contact with North or Soul Kel-sith.

At this time, it is believed Humans are the only race that walk the lands of  Eihydia. However, Amphorian, Varconian, Indago and Cryinale Scholars dispute this fact; unfortunately, there is little concrete proof to disapprove or approve these claims.