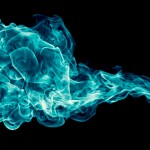 Derium Ceriuam, better known as the Mad Sage, (Age unknown, Human, lived during the end of the 11th Age) was an Eridan native. His greatest and most notorious achievement was the creation of the Glorifian Construct, which served as an amplifier for arcane purposes and as a doorway to parallel worlds.

Derium lived towards the end of the Age of Eclipse (11th Age), long after the demons were defeated or vanished. He would end up playing a vital role for the Age’s eventual conclusion. By this time, all life on Eihydia was still reeling from the cleansing fires of the Last Rites of the Righteous that occurred roughly 1000 years ago: demonic hordes roamed the landscapes for 100 years incinerating all civilization. While the demons were gone during Derium’s life, their affects on the world greatly impacted his growth as an individual as well as a Sage.

Any records which deal with Derium can be considered scattered, incomplete, and at times, contradictory.

Derium’s interests in the arcane grew from devotion to fanaticism at a very young age.

As a young man, Derium excelled in the arcane and attended the Riesuts Royal Academy. At seventeen, Derium became the youngest member in history to be bestowed the title of Sage. At twenty-eight he became a High Sage and an advisor to Eridan’s Royal Family.

Derium’s interests in the arcane grew from devotion to fanaticism at a very young age. Many of his instructors were concerned with his obsessive research and urged for his removal from the academy—the Royal Family, who intervened on Derium’s behalf, prevented this from occurring. Derium quickly learned to hide his feelings in order to still remain in favor so he could eventually find the right opportunity to pursue his true passions.

Derium became primarily interested in parallel worlds when he was around the age of thirteen. At fifteen he published his first book, Utpan Relea, or Utopian Reality, which detailed a philosophy for infinite universes with infinite possibilities. He argued that through the Gaia Tributary it would be possible to locate and transfer to the Utopian Reality—a world composed of the best of all possible realities.

Consider a Wizard’s staff. Inclusion of Anima within the wood allows for better control. Chisel the edges, and align the Anima to construct a smooth catalyst, and you shall witness far more powerful spells. Now, picture a mountain. Imagine for a moment this mountain is our staff; you break away the rock and find Anima beneath. Cut and polish this mountain until it is as smooth as the catalyst we considered previously. If control is the only deterrent to our imagination, and this mountain is perfect, arcane control, then what cannot be accomplished? Start with a simple teleportation spell, and work forward.

Utpan Relea was met with harsh criticism. Critics argued that a “perfect world” would not be perfect if it became a destination for travel. It would only be a matter of time before those who traveled there would seek to abuse it for their own purposes. Some argued that the “perfect world” would not contain the Gaia Tributary, thus preventing transfer, but this is still debated.

He called this new tower the Glorifian Construct and dreamed of the day he could construct it..

As an advisor to the Royal Family and High Sage, Derium designed structures that would amplify Eridan’s protective energy shield to be built and improve its arcane powers. Overtime, Derium designed several new types of towers, much more potent than the existing essence-crystal-array. Seeing an opportunity to become the most powerful city in the world, the Royal Family immediately drafted Derium’s plans and the new towers were built around the city’s perimeter in under a year. The amplifiers proved so effective that Derium used his new found acclaim to improve on his previous designs. He theorized a larger and single tower using anima could be constructed. He called this new tower the Glorifian Construct and dreamed of the day he could construct it. Other members of the Arcane Order and Riesuts Royal Academy started to see Derium as a maverick – dimensional travel in theory is one matter but attempting to bring it to reality is a completely other one.

The High Sage studied Eclipse from atop the highest mountain on Ama’rane – Mt. Zeolin.

The world entered into a Ice Age as a powerful Grand Demon named Eclipse woke from its slumber towards the end of the Age of Eclipse. The demon turned into his natural form: a gaseous state and blotted out the sun. The world became blanketed in darkness and ice. The Arcane Order and Royal Family commissioned High Sage Derium to visit Ama’rane in order to investigate Eclipse. A military and mining outpost was built near a recently discovered source of anima. He eagerly pursued this endevour with utmost dedication and persistence.

The High Sage studied Eclipse from atop the highest mountain on Ama’rane – Mt. Zeolin. Incidentally, Mt. Zeolin had rich pockets of Essence, thus providing Derium with the location and power he required for his amplifier. Derium believed he could use the mountain to help open a dimensional portal to another plane and potentially draw Eclipse away from the sun and end the Ice Age.

Derium sent word back to Eridan on this plan and within a year his proposal is approved and he sets to work immediately. Eridan and Derium began hiring workers from Vanyelar and villages in South Kel-sith en-mass. Living conditions are sub-standard and as construction continues fatalities happen –frostbite, over working, disease and starvation. With each death Derium seemed to become even more determined to finish the tower. Due to the great importance in building the tower – to defeat Eclipse – that all involved, Derium, Eridan and the workers themselves, were fully committed to finishing the project. All understood sacrifices must be made for the greater good.

Roughly halfway through construction, the workers began to exhibit symptoms of essence exposure – mild insanity, violent tendencies and mutations. Those afflicted were quarantined at the base of Mt. Zeolin. Eventually, due to overcrowding, they were moved to the basement of the partially finished Glorifian Construct. The High Sage started to become afflicted as well, but instead of going insane, he found his power to control essence greatly magnified. As the workers began to dwindle, he created rock creatures to carry out the tasks of anima extraction in Mt. Zeolin and construction of the tower. This task would require him to stay close to the mine in order to control his rocky creations. Overtime, the High Sage became closer to the cliff of insanity, but never tumbling over. The Sage’s stead-fest belief in the work he was doing seemed to keep his mind balanced as well as seeing Utpan Relea become a reality.

Once finished, Derium took his position atop the Glorifian Construct. Activating the tower, Derium began to channel his internal energy, enhanced by his exposure to essence, through the amplifier and a massive portal to another dimension burst forth before him and all who helped construct it. He pulled Eclipse, towards the portal. An unintended side effect then occurred: Many workers, structures, and debris could not resist the strength and become sucked into the portal – never to be seen again. Their agonizing screams did not seem to phase the High Sage.

The tower, as strong as it may be, was not able to fully pull Eclipse into the opening. Derium, in a final act, unleashed all of his remaining essence stores through the Glorifian Construct. This caused the portal to become overloaded and backfired and grabbed onto Derium and the tower, sucking them into it – never to be seen again.

Eclipse, his orbit having been shifted, was no longer blotting out the sun and Eihydia was free to once more enjoy the light and warmth sunlight offers. The ice age rapidly begins to end. However, the Grand Demon’s presence is still felt: for fourteen days (fifteen if it is a leap year) Eihydia is plunged into darkness from the remains of Eclipse that still orbit the planet’s atmosphere; this month became known as Nocural.

It was initially unclear where the High Sage went after he and the Glorifian Construct vanished into the portal. However, many theories existed suggesting that he infact made it to another dimension. The scholars surmised that his presence on any plane would corrupt both the plane and the High Sage.

Unfortunately for Eihydia, this was correct. Having been transported to the Abyss, a plane of perfection shattered, his mind became warped and twisted. It is likely the destruction of the perfect plane due to his presence and the near-insanity caused by essence exposure, drove him mad. Eventually the Mad Sage desired to return to Eihydia. Perhaps he was seeking another perfect world and thought Eihydia was that?

At some point Derium discovered a way to return to Eihydia and did so during the 14th Age.

At some point, Derium discovered a way to return to Eihydia and did so during the 14th Age, bringing with him the Glorifian Construct. This time, he dropped the Glorifian Construct in the middle of Tralisia located on the Ama’rane continent. In an attempt to wage war and destroy Eihydia, with his army of Abyssians, he kidnapped Arch Mage Erius Riesuts—an active member of Tralisia’s government and Arch Mage of the Riesuts Royal Academy and Arcane Order.