There are many abilities in A Tempest Season. Abilities consist of skills, spells and gifts. Each ability has a certain function and levels. The following page will explain how they work.

To view your abilities type one of the following commands:

The skill screen has a Simple Mode, which greatly reduces the information displayed.

To set the simple mode type:

The spell screen has a Simple Mode, which greatly reduces the information displayed.

To set the simple mode type:

In addition, the gift screen shows the progress to the next donation level for Clerics. 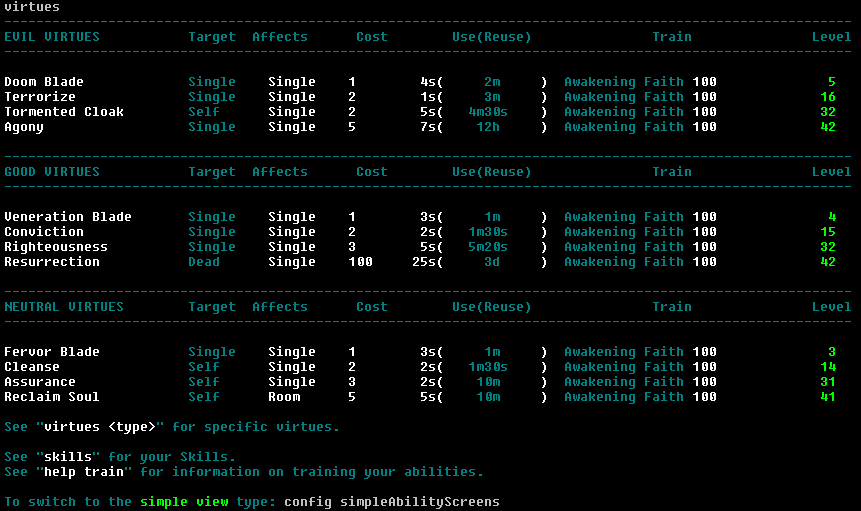 Each gadget adds to the passive upkeep cost. This is calculated each minute and drained from your personal steam generator. See the section on Using Gadgets for more information!

A simple mode can be turned on or off for the Skill and Spell screen by typing:

This mode greatly reduces the amount of information displayed: 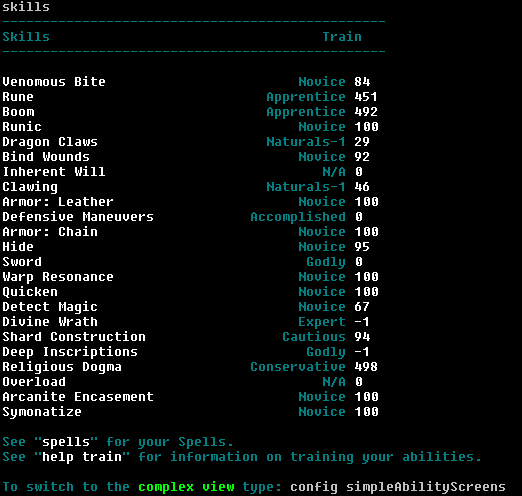 The following explains how to use skills, spells and others. Each are slightly different.

Many ability names can be abbreviated, most often, using the first character.

If the spell “Crystallized White Out” was known, the following could be typed:

Experiment to see how short you can make your ability names!

Using a skill is easy to do. There are two ways to do so:

The game will perform an automatic lookup for skills if an invalid command was detected. The majority of skill names are invalid game commands.

To use a skill that has multiple words in it, type the name without spaces. For example: use dropkick dayrinni..

Using a spell is easy to do.

To use a spell that has multiple words in it, type the name without spaces. For example: cast fireball dayrinni.

Using a gift is easy to do.

Clerics need to specify the amount of favors they’re using on each gift. Each gift has a minimum and maximum amount of favors. The amounts can be seen on the gifts command. To make it easier on the Cleric, the max word can be used to fully pump up a gift.

To use a gift that has multiple words in it, type the name without spaces. For example: pray  holyarmor dayrinni min

Using a virtue is easy to do.

Templars need to have the correct amount of favors and meet the necessary alignment requirements. You may only use Good virtues while in a Good alignment, Neutral in a Neutral Alignment (except Fervor Blade) and Evil in an Evil alignment.

To use a virtue that has multiple words in it, type the name without spaces. For example: unleash reclaimsoul dayrinni

First, a gadget must be equipped before it may be used.

Once a gadget is equipped, such as the wrist gun above, it must be cranked to fire it:

Steam is used to power the Agents gadgets Any equipped gadget takes steam which is drained every minute by a %. The more gadgets equipped, the stronger the drain. Additionally, gadgets take some steam upon activation (passive gadgets do not).

To restore a percentage of steam to your personal generator, type:

This will restore the indicated value as a %. If left blank, the amount restored will be 100%.

Cranking the generator and restoring the steam.

As you adventure, your abilities and specializations will be able to raise up in level. To train an ability or specialization to the next level visit the trainer in Tralisia.

To view the screen to see what abilities can be trained type: train list

In the above, several skills can be trained to the next level: defensive maneuvers, fanaticism, fix and several others. Each ability costs gold and sometimes a tier point to raise up in level.

To train an ability to the next level type: train ability <slot>

To train a specialization to the next level type: train spec ‘<slot>

For example: train ability 1 would train the Bind Wounds skill to the next level.

As mentioned above, the cost to train an ability or specialization requires gold and sometimes a tier point.

Tier points are used to level up abilities and specializations.

Not all abilities require a Tier Point but all specializations do. To determine if an ability requires a tier point, view the train cost by typing, at the trainer:

Generally, the first few levels of an ability does not require a Tier Point – only the higher levels do!

There are many ways to gain tier points, which are explained below.

Tier points are gained during level up of your character’s normal level. Some classes receive extra tier points throughout their advancement, which is based on the number of abilities they ultimately receive. Mages, Rogues and Arcanist gain an extra tier point every 5 levels.

For example, going from level 1 to 2 would grant you a single tier point.

You may also buy up to 10 tier points at the trainer. Each tier point has a cost, starting from 500 gold to 3,500 gold for the last point.

To check the cost of a tier point type:

To buy the tier point type:

Some quests award tier points upon completion – so go out and explore! The dynamic quests offered by Dar’larna also have a small chance to award a tier point. She can be found in the Swordspire Training Hall, west of the center of town.

At level 100, all experience gained by your character goes into generating tier points. There is no limit to the amount of tier points earned.

Remember, you can earn any amount of tier points long term. So feel free to experiment after you reach the maximum level!

Many abilities require a currency cost to level up. If the ability has uses, this cost will be prorated against the remaining amount.

If you’re short on currency, it may be cheaper to practice your abilities to gain uses to lower the training currency cost!

Not all abilities have uses. Specializations do not have uses and thus their cost cannot be lowered in this manner.

Abilities that can be trained have levels associated with them. The average amount of levels is 3, 5 and 10. To see the maximum level of an ability, see its help file.

The following are the lists of adjectives used:

There are some abilities that follow different adjectives for their levels, such as Shard Construction. However, the vast majority of the abilities in the game use the above.

You may reset your characters tier points at the trainer for 5,000 gold. When doing so, all of your non-natural abilities and specializations will be set to level 1.

You will receive all of your spent tier points and 75% of the spent ability points as a refund.

Your Natural abilities will remain the same.

To reset your tier points while at the trainer type:

Another way to practice your abilities besides using them is paying the trainer a small fee per use. The cost of each use is 10 silver. There can be cases were the ability cost can be quickly reduced by spending a small amount of gold.

Practicing abilities at the trainer requires ability points and silver.

Ability points are gained while leveling up your character’s level and killing monsters in combat. The more monsters killed, the more ability points you’re character acquires. These can be used to gain cheap uses at the trainer.

How to Practice at the Trainer

To find out what can be practiced, type: practice list

To practice an ability type: practice <slot> <amount of uses>

Remember, each ability point spent on an ability lowers the training cost.

It may be a good idea to practice an ability with 1 ability point and check how much the price drops by typing train list. It could be cheaper to use ability points before training!!

You may also learn new abilities and specializations. These can be learned at the trainer in Tralisia as well as from items in the game. The learn command is used to do this.

Learning at the Trainer

To view the abilities that can be learned, while at the trainer type learn list.

There are rare trainers found else where in the world. It may be a good idea to see if learn list works in any other places in the game…

It is also possible to learn new abilities and specializations from items, such as tomes, manuals, books and scrolls.

To learn from an item type: learn item ‘item name’

Learning from an item.

Mages learn spells and specializations from tomes from the Magic Shop located in the Merchant District.

This article was written by Verise Dust. Hello and welcome to A Tempest Season. By now you have probably read some of the lore for the game, maybe you’ve started your first character and you’ve gained a couple of levels, and in so doing you have accumulated a few Tier Points, you may be asking …

This article was written by Verise Dust. Raising Abilities can be a tough, costly and time consuming endeavor, but this short guide will hopefully shed some light on the process and make things easier for you. For most skills in the game the best way to raise them is to use them over and over …