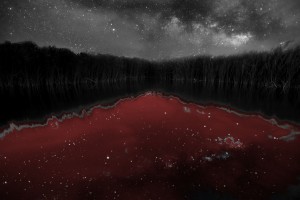 Ritual of the Red Dawn

In Pagri society on Ama’rane, Blood Shaman are considered a tribal elder and has significant influence over the tribe. They are followers of the Way of the 13 Pagri Totems and Blood Rites. These totems contain the spirits of important creatures that have an important impact on Pagri society on Ama’rane and can be harnessed by the Shaman. Due to their tribal nature and extreme environment on Ama’rane, their form of mysticism developed into Blood Rites. Each Shaman uses their own life force to either inflict pain or heal wounds.

Finally, with the establishment of Tralisia and intermixing between the two societies, the teachings of Blood Shamans have spread.

Blood Shamans are considered hard difficulty and are suggested for experienced players to try. Their mechanics are more complex due to having to balance their life force to heal others and managing many complex abilities.

The role play can be challenging due to having to juggle Pagri tribal training, a view of blood being as a source of their power, and not following the traditional Five Entities that the majority of the other players in Tralisia follow.

Blood Shamans serve as a Healer, Damage Dealer and Utility.

A Tempest Season offers many unique opportunities for Blood Shamans. Every Blood Shaman received training on Ama’rane from a Pagri Blood Shaman. The Pagri are one of the last groups of indigenous people on the continent. It is expected your character has a valid role play reason in joining the Pagri and learning the way of the Blood Shaman and the 13 totems. The only race that is acceptable to having been born Pagri is a Human. All other races have traveled to Ama’rane and are outsiders from the tribe.

Blood Shamans start in a unique newbie area as opposed to the general area. In this area, the Blood Shaman will learn about the Pagri and the way of the 13 totems.

Blood Shamans are able to offer up several different RP scenarios: a master of spirits, a unique view on blood and using it as a source of power, clashing with the Five Entities, and the ever changing scope of the Ama’rane landscape: as Tralisia expands and more people arrive, they encroach on the Pagri native land more and more.

It is expected your character has a valid role play reason in joining the Pagri and learning the way of the Blood Shaman and the 13 totems. The only race that is acceptable to having been born Pagri is a Human. All other races have traveled to Ama’rane and are outsiders from the tribe..

Blood Shamans use blood from their own body to power their Blood Rites. Blood Rites are capable of healing an ally or harming an enemy. They do this by EFFUSING the blood out of their body.

Many Blood Rites take the Shamans own health to cast, while others use smaller amounts of blood. A Blood Shaman can kill themselves if they do not have enough life force to fuel their blood rites.

Each Shaman stores a small amount of easily accessible blood, which is used for some Blood Rites and also empowers their Blood Rites on usage. When this reaches 0, the Shaman no longer has access to these abilities and powers. In order to restore this pool, they must cut themselves or drink from pools, rivers and torrents of blood.

There are 13 Pagri Totems in the wild. As of right now, 4 are available for the Blood Shaman to find and equip.

You may start searching for totems at level 25. When you find a totem, you may activate it and battle its spirit in order to gain its powers. Each spirit will drop an item which can be studied to learn a specialization. At any one time, a Shaman can only equip 2 totems. Each totem has a theme and offers several automatic abilities to bolster the Blood Shaman in combat.

Totems spawn every 30 minutes in areas that are typically level 25 or higher and last for 15 minutes. Exploring the world and knowing it well will allow Blood Shamans to find these totems quickly. The TOTEM command can be used in order to scan an area for presence of any totems.

A totem must be held in order to use any totem skills. You may use the TOTEM command to summon and equip a totem, scan an area for any spiritual totems, or release your held totems.

Sanguimancers harness their blood power to inflict others with pain and debilitating aliments. Their Blood Rites cause their enemies to be consumed and weak, ensuring they are easy prey to finish off!

Using the sacred life sustaining energies of blood, Blood Menders aim to manipulate their allies life force to keep them alive in dangerous situations. Each Blood Mender can form a Crimson bond with another, sharing their life force.

Blood Shamans do not have access to any special attacks.

The basic specializations the Blood Shaman has access to at level 25 are:

Blood Shamans need to seek these totems out in the wild and defeat the corresponding spirit contained inside to attain these specializations!

The Blood specialization, Devouring Viscercity, can be learned at any trainer in the city.

It is said, the old Pagri Prophet, Sumhris, was the Totem-Master of all aspects feline, and was the original binder of the cat spirits. Furthermore, this cat spirit is only the first inclination of his works: for the dreaded and deadly jaguar totem exists in secrecy, elsewhere on Ama’rane. The Totem: Cat contains an ancestral cat from the Pagri Tribes. Its form and shape closely is akin to the plains cats south of Tralisia.

Totem: Cat is for the Blood Shaman who wish to become more agile and dexterous.

This totem contains the spirit of a vlie creature which was once a mighty Arachnos spider, known as Terror. It was said, by the Pagri, that this creature would feast on hundreds of tribe members, until it was finally put down by the mightiest band of warriors ever assembled. The battle lasted 6 days, where in the jungle of Ama’rane, a contest of prey and hunter ensured. Many warriors fell but it was not until the spider was simply overwhelmed. A Shaman who accompanied the band quickly contained the spiders spirit in a shard of the blackest obsidian. To seal the spider inside, for its soul was overwhelming even in death, it was dipped in the blood of the fallen warriors.

Totem: Orb Weaver is for the Blood Shaman who wish to become stronger and more precious in combat.

The basin worms formation is not known. Its history is concealed from the deep earth it came from. What is known is these vile beasts rampaged across portions of Ama’rane until the Pagri lured them into a basin and bound them to the area. It was said, a man of the rag managed to control the beasts enough to force the entire populace to the basin. And it was then, the rag man bound them to the area through a ritual of keeping. To serve future generations, a portion of rag and a slain basin worm was bound to a tall stone tower, to give Pagri Shamans the tools to beat back any breakouts from the basin of worms. This is one such spirit and it is still as vile in death as it was in life.

Totem: Basin Worm is for the Blood Shaman who wish to protect themselves in combat.

Many of the greatest Pagri warriors, shamans, and elders have had their spirits encased in totems for preservation. Upon death, an elaborate ritual is performed, which consists of partially draining tribal members blood, to bind the mind of the decreased figure into a craved totem. These totems are then placed in the world and lay dormant until a time of need from the Pagri. Once awakened, the spirits wisdom can be harnessed to overcome whatever dangers are currently being faced.

Totem: Spirit is for the Blood Shaman who wish to aid the mind of others and increase their potency in combat.

Some Blood Shamans focus more on the blood arts, and specific rites, instead of spiritual totems. These Blood Shamans are able to essentially turn blood into a sentient and potent force to be reckoned with. However, they do not completely forgo their spiritual elders: they form a unique connection, that lets the shaman to transfer themselves or an ally to their home village, north of Tralisia.

Devouring Viscercity is for the Blood Shaman who wish to use more Blood Rites.