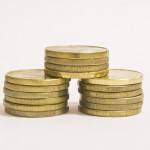 Throughout the ages, currency, traditionally in the form of silver and gold coins, was used. The majority of the kingdoms and nations saw, early on, for a need to have some standardization. This was particularly needed during the Age of Exploration, when a time period of global trade and world wide empires became common.

The reasons for silver and gold being used for currency is due to availability world wide.

Silver was plentiful in the earth during early times; many nations and people were able to mine enough for it to be used as a currency.

Gold, on the other hand, was much more rare but still had an even distribution much like silver. Its scarcity was not too high, allowing it to be used as a currency.

Copper, even though easily found in some locations, was not as easy to acquire as silver in others. Due to the natural processes of Eihydia, and in some cases the affects of the Tributary and terrible magical conflicts, copper was not present in some locals, particularly deep South Kel-sith.

Platinum is very rare, much rarer than gold and behaves much like copper in distribution in the earth. Platinum is usually found deeper in the earth thusly making it only acquired by a heavy investment initially. On top of the difficulty of locating it, the amount of veins present in the world is surmised to be very low. Only several mines contain veins worthy of being mined: Lon’gordia, Evonia and some in the Vari’kah Kingdom. It is surmised that the Dwarves of Ravinder, ripe with greed for Platinum and other raw resources, dug to the depths of Eihydia and paid deeply for it…

Much of the gold and silver used in the 14th Age has been mined from the earth long ago. Some mines are still open, but the majority of them are barren. The terrible wars from the ages have taken a toll on the planets resources and is partly why Tralisia’s formation was supported by the Empire: to find new resources.

The question of minting has an answer that is lengthy and interesting. Minting varied during the early ages, before a somewhat unified process of minting became agreed upon. A unified process slowly came into being, and with each age that passed, it made more sense to have one: Nations and kingdoms were destroyed, and continents were reshaped

Overtime, the Federal Merchant Association(FMA) gained more and more power over the merchant trade and other aspects. It was decided, by all of the kingdoms for reasons including stability, to have the FMA be predominantly in charge of minting the coins. An agreement was struck, and today, even with Vanderducks death, the majority of coins in and put into circulation are from the FMA.

An important side note must be made: It is rumored that upon becoming director of the FMA, Matonimus Vanderduck, commissioned a giant duck statue made of gold coins. No one has found this statue as of yet.